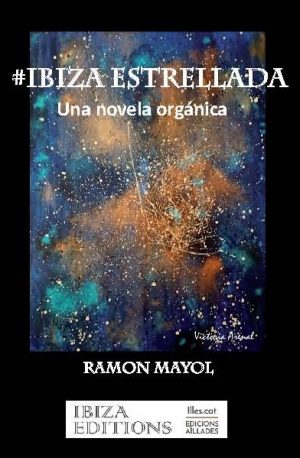 The first novel Ramon Mayol,,es,Palma,,en,It is cultural and passionate promoter of books,,es,Founder of the group of musicians from Ibiza and Formentera,,es,lizard Rock,,ca,with promoting contests,,es,festivals,,es,music awards and many other activities to promote music in the islands,,es,Member of Cor Ciutat d'Eivissa and the group of Rock in Catalan,,es,Stock Rock,,es,with whom he recorded an album,,es,Pussy de pic,,it,blue,,de,Discmedi,,ca,It is finalizing a solo project,,es,Mon,,en,with which it will release first CD,,es, #IbizaEstrellada. A novel organic came true in February 2019. A critical metaphor as short and original novel where underlying background analysis of human behavior.

The presentation took place in Palma, on Sunday, 3 de marzo, a las 13:00 horas, s'Hort in the Garden of the King, framed in the acts of the Day of the Balearic Islands. It presents the act journalist and professor, Peter Estelrich.

It is a novel 167 pages where the narrative voice is a star:

I'm a star and my name Ibiza. Sometimes, to make me rage, I tell me I'm nothing but a sphere of gas in equilibrium between gravity and pressure, more or less dense and more or less hot, but I prefer to be called Ibiza.

The cover image has been made by the Madrid artist settled in Ibiza Victoria Arenal who has already collaborated with Mayol in other publishing projects, as FRAGILE fig and three ..., de TONI ROCA.

The novel part of the Narrative collection Anacrèptica what Ibiza editions It has launched. The presentation in Ibiza took place last April 2019 the library of Santa Eulalia, by the writer Lluís Ferrer Ferrer and contón with a large number of public.

Sold out the first edition, A second printed edition is now available as well as the book in digital version (.PDF, .MOBI, E-PUB) both in ILLES.CAT like in Amazon (para Kindle)