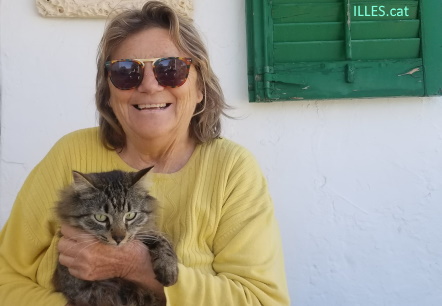 philologist, essayist and translator, has written several books and articles within the scope of Catalan literature and universal. Is Professor of Language and Literature Institute and worked in Verdaguer Barcelona and Ibiza in the University of the Balearic Islands.

Studies of Fine Arts, made inroads, especially, in the world of image (photography, prize Campoamor; video: Three perspectives for a box. Art collection LA CAIXA). Thanks to his multifaceted artistic works are the pictorial and literary Vicent Ferrer Guasch ("Lime and memory" (Editorial Moll), photographic-literary project with Alejandro Marino, in progress, and work on "From island" with Carles Guasch whose painting defined as the need·calligraphy of a dream. Also cabbage·Working with the artist Laia Moreto Alvarado, Photo from the book "Punta Galera". Is also underway, literary-pictorial project "Elles" which together with the poems are co Nora Albert·will labor 16 women artists Ibiza. It should be also noted his participation as a manager in various cultural exhibitions.

As a poet has won several literary awards, including the Lambda Award (Words and embers,2004, Ed.Brosquil) and the prize Oleander ,2007 (Tentacles sky, 2007.Studies Institute Eivissencs), as well as the prize Soller Valley, 2012 ( Punta Galera) , Vila de Benissa, 2014 (fragile wreck) II Prize and the City of Ibiza 2014 (small print). It belongs to l'AILC, a l´AISC, a l ´Anglo-Catalan Society, l'AELC and a PEN, work desk associations with which it has worked well with communications and / or articles or conferences or concerts. He with·laborat the Diario de Ibiza (Miranda charged) and radio (IB3). El 2014 has been the subject of study at the University of Torino with Laurea Thesis (Cum Laude) d'Alessandra Loreggia i el 2015 magazine published by l'AISC (Italian Journal of Catalan Studies) has dedicated a 100 pages.

Any of the 2011 l'AELC is a member of Ibiza and Formentera.

As a translator published:

It was set to music by:

MARCELA FRIEDERICHS: In "Words and embers":"As for sea dives" "Were your hands…"" While the violin tingling…"From" Tentacles sky ": "To desire fragments mar ...:"From A to Zed"(cello) of "Punta Galera": "How difficult was visible to the world ..." "To undo fine and we love bags…"" You were there, April a far… ("Sage and rosemary) "A spark cabbage·He laps at…"From" Fragile shipwrecks ": "How difficult was visible to the world…"" The afternoon passes page…”

EDUARDO RINCÓN. Some of haikus "Since the island"

Group "JÚLIA" with the single "Naufràgils" based on verses of the poem "Fragile shipwrecks".